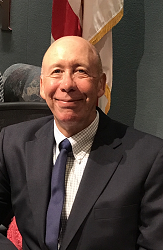 Prior to Sarasota, Barwin served six years as Village Manager in Oak Park, Illinois, and eight years as City Manager in Ferndale, Michigan. Oak Park is located on Chicago’s western border, and Ferndale is located on Detroit’s northern border.

Like Sarasota, Oak Park is home to over 50,000 full-time residents, with a traditional downtown that serves as a regional employment center and tourist center. Oak Park was home to Frank Lloyd Wright and Ernest Hemingway.

As City Manager in Ferndale, Michigan, Tom was credited with advancing urban bike lanes and multi-model transit in Metropolitan Detroit, while leading an economic turnaround that transformed the community to one of Michigan’s most vibrant, creative, and diverse communities.

Tom is married to Margaret Bailey. Together they have raised four sons, Sean, Joe, Sullivan, and Connor. Their family has now grown to include daughters-in-law, and 2 grandsons.